Councillors welcomed a delegation of officials from Norway to mark 75 years since Neilston provided sanctuary to refugees fleeing the Nazis during World War Two. 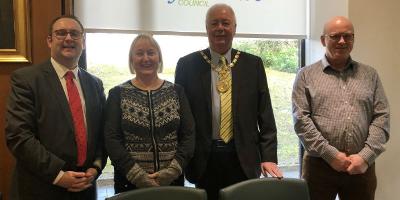 The Mayor, Deputy Mayor and Treasurer of Sørøya, from the Municipality of Hasvik, made the official visit from March 1-5 to commemorate the anniversary of a mission in February 1945, led by the Norwegian Military Services and the British Royal Navy, when 502 civilian refugees were rescued from the Island of Soroya, Norway.

Having arrived in Greenock, the refugees were taken to Neilston Camp where they stayed until September that year.

The purpose of the visit was to pay homage and express gratitude, on behalf of the Municipality of Hasvik, for the operation and the reception provided to the refugees, including by the people of Neilston and those in the wider East Renfrewshire area.

During the trip, the delegation made an emotional trip to the former camp in Kingston Park and exchanged civic gifts with Provost Jim Fletcher. They also laid flowers at the grave where three of the civilian refugees were buried whilst in Neilston - two children and an elderly lady.

Provost Jim Fletcher said: 'It was a great honour to welcome our visitors from Norway and reignite the links between East Renfrewshire and Sørøya that were forged during the Second World War. The officials were touched to be able to visit Neilston to see for themselves the village where so many of their residents called home during 1945. It was also clear that they wanted to pass on their gratitude to the people of Neilston for the sanctuary which was provided, as even though so many years have passed the warmth and welcome that was received is still greatly appreciated.'