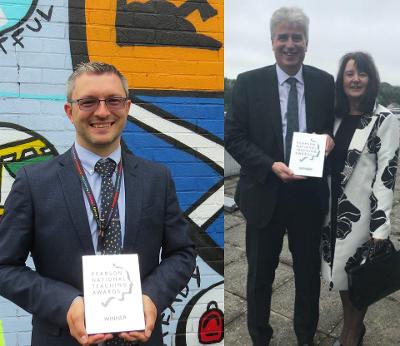 Selected from thousands of nominations, 2 East Renfrewshire Headteachers have won prestigious awards in a UK wide recognition of teaching.

It is a fitting reward for Mr Maxwell, who retires at the end of term, after transforming Eastwood High School in his 19 years as headteacher.

His inspirational leadership, honesty and genuine interest in the welfare of his pupils and staff has helped forge an amazing school community. Throughout his 37-year career his top priority has always been to secure the best possible outcomes for his pupils.

Come rain or shine, Gerard Curley is at the school gates to welcome pupils and their families in the morning. Mr Curley has established a set of values which place pupils at the heart of the school community, making them feel cared for and appreciated. My Curley's leadership is built on trust and has created a Senior Leadership Team which has the courage to go about their work diligently and effectively.

The pair have now been shortlisted to win two of just 15 Gold Awards later in the year, in a programme which will be broadcast on the BBC. This is a great opportunity to celebrate the exceptional school staff who have worked wonders during an incredibly challenging time for educators across the country.

Mark Ratter, the Council's Director of Education, said: 'I am delighted that Stuart and Gerard have been recognised for their outstanding contribution to education. Both are wonderful Headteachers and bring so much to their school communities. For Stuart to win a Lifetime Achievement Award shows his dedication to improving the lives of young people throughout his career. And as he prepares to retire, this is a fantastic accolade to sign off with. Gerard's enthusiasm for his school community shone through throughout the challenges presented by Covid. He is a worthy Headteacher of the Year and I am delighted for him. These two Head Teachers are a great example of the high standards which are set by leaders across all of our schools in East Renfrewshire, well done to you both.'