Raising of the flag to mark Armed Forces Day which will be held on Saturday 25 June. 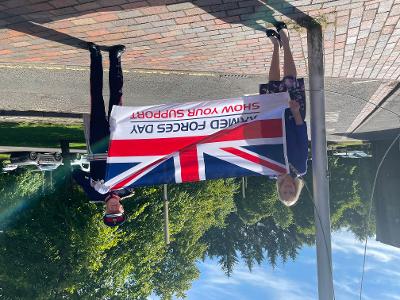 Provost Mary Montague joined Lord-Lieutenant Colonel Peter McCarthy at the Council Headquarters in Giffnock to raise the flag, commemorate the occasion and pay tribute to the men and women of the armed forces community.

Guests including serving military personnel, veterans, elected members and members of the local community were welcomed by Provost Montague to the event.

The flag was raised by WO1 Tony Morrin from HMS Dalriada, and it marks the sacrifices made by those serving the country - past and present, and the Armed Forces Day flag will fly all week in the lead up to the 14th national Armed Forces Day on Saturday 25 June.

Provost Mary Montague said: 'Armed Forces Day celebrations begin on Monday 20 June when the Armed Forces Day flag is raised on buildings and famous landmarks around the country so I'm delighted to be here today to raise the flag on behalf of everyone in East Renfrewshire.

'A flag raising ceremony is usually an annual event held by the Council but COVID-19 restrictions over the past two years meant it had to be scaled back. It's an important event for so many of our community members each year so I'm pleased it's been able to return to normal this year. It gives local people the opportunity to show their support for the men and women who make up the Armed Forces community - from serving soldiers to service families, and from veterans to cadets'.

Colonel Peter McCarthy, Lord-Lieutenant of Renfrewshire added: 'We are remarkably fortunate in the outstanding contribution that our Armed Forces make to supporting and sustaining the lifeblood of our nation. How very fitting it is that East Renfrewshire Council are raising the flag today to publicly acknowledge and celebrate the unconditional courage and commitment of everyone in our Armed Forces community.'