Residents name gritters as we prepare for winter

Our five biggest gritters are ready for winter after residents and local primary schools put forward imaginative names in a recent competition. 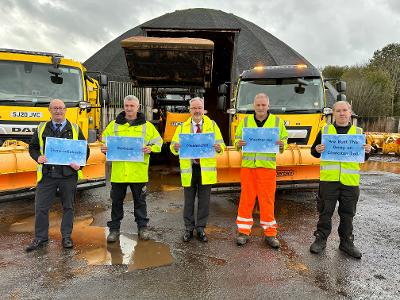 With more than 150 name suggestions received and over 2,000 votes cast, the winning names are:

Gritting crews are now on standby 24 hours a day, 7 days a week and the newly named gritters will be out this winter season responding to weather alerts including freezing temperatures and forecasts for ice and snow.

With 4,500 tonnes of salt already in stock, we are already well equipped to treat priority routes across the area over the coming months.

Councillor Owen O'Donnell, Leader of East Renfrewshire Council, said: 'Some fantastic names were put forward for our gritters by local residents and primary school pupils so thanks to everyone who took the time to think of names and make their suggestions - I really like that all of the names chosen were based on places around East Renfrewshire with a winter theme.

'Our gritting teams are on call throughout the winter to keep our roads moving and everyone safe. They treat such a wide area that it's just not feasible for everyone's street and pavement to be gritted. We appreciate the support we get from residents each year who are able to grit outside their homes, driveways and pavements and outside their homes and this makes a huge difference. If you're able to please check in on your elderly and more vulnerable neighbours this winter if you can.

'During normal winter weather, priority 1 to 3 routes are treated as well as some priority 4 and 5 routes and more information about these routes is available on the Council's website. Regular updates are also posted on the Council's social media channels when gritters will be out treating key routes and during periods of prolonged severe weather.'

There are over 168 miles of priority gritting routes across the authority and a total of 342 public grit bins, including 17 larger community bins and residents are encouraged to make use of the free grit available.