Maidenhill Primary and Nursery Class given formal seal of approval 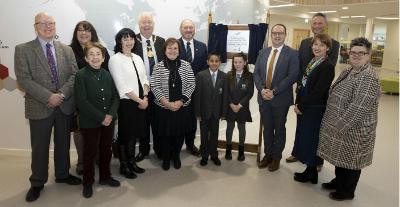 An official opening ceremony was held at the new £15m Maidenhill Primary and Nursery Class on Wednesday 29 January.

The facility opened its doors to pupils at the start of the session, and has now been given the formal seal of approval with the unveiling of a commemorative plaque.

Councillor Paul O'Kane, Convener for Education and Equalities, and Council Leader Tony Buchanan both expressed their delight at the opening of the new school and nursery, which will help shape the new Maidenhill community.

The school has welcomed pupils into two primary one classes, and at a range of ages throughout the rest of the year groups, as well as children attending the new 120 place nursery class.

With more than 800 homes being built in the surrounding area in the coming years, this facility has been established so that East Renfrewshire Council can address the increased demand for primary and nursery places.

Councillor Paul O'Kane, Convener for Education and Equalities said: 'It is fabulous to see the new Maidenhill Primary and Nursery Class up-and-running in this vibrant, state-of-the-art facility. We are committed to providing the very best opportunities for all our children and young people and the facilities available at Maidenhill, both indoor and outdoor, really are top class. The affinity that the pupils already have with the school is so evident from the minute you walk through the doors and I'm sure as the community grows and develops we will see fantastic things from everyone connected to Maidenhill.'

Head Teacher Alasdair McDonald said: 'It's an absolute privilege to lead this fantastic new community and since opening in August we are already making huge strides. The facilities are undoubtedly fantastic and they play such an important part in supporting our pupils in their learning. A school is so much more than bricks and mortar though, and we are enjoying building this new community together with children, families and staff - work which will continue in the months and years ahead.'

As part of the development of the school, the catchment areas for Kirkhill Primary and Mearns Primary have been revised to allow a third catchment area to be established for the new school.

These changes will have no impact on transfer arrangements to the associated secondary school. Maidenhill Primary will be associated with Mearns Castle, which has sufficient capacity to accommodate these additional pupils, and its catchment will not change.