The Head Teacher at one of Scotland's leading schools is to be awarded with an OBE in the Queen's birthday honours list. 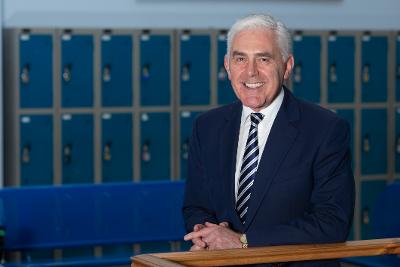 John Docherty, who has been at the helm of St Ninian's High School in Giffnock since 2005, has been named in the list for his services to education over a 41-year career.

The modest 63-year-old, who lives in East Renfrewshire, has paid tribute to the amazing colleagues who have supported him throughout his educational journey.

John Docherty said: 'I am absolutely humbled to be awarded with this amazing honour and it is a sense of great pride for me and my family. When I started out as a geography teacher all those years ago I could never have imagined gaining an OBE for my work. I love teaching and get great satisfaction from seeing pupils develop and become confident individuals who are ready for the next stage in their lives. Throughout my whole career I have been fortunate to work with so many great colleagues, with many guiding me so wisely in the early part of my career. It is such a privilege to be the Head Teacher at St Ninian's and I am thrilled to have been recognised in this way for doing a job which I absolutely love.'

Having graduated from the University of Glasgow in 1978 and completing teacher training the following year, Mr Docherty's career began as a Geography teacher at St Margaret's High School in Airdrie.

After six years, a promotion to Principal Teacher of Geography at St Columba of Iona, in Glasgow, was Mr Docherty's next move. Another Principal Teacher role at Taylor High School, in Carfin, was next, before becoming Assistant Head at St Ninian's in 1990.

In 1996, Mr Docherty moved to St Andrew's Secondary, in Carntyne, as Deputy Head before taking on his first headship at St Andrew's High, in Clydebank, four years later.

Five years later Mr Docherty returned to St Ninian's High, this time as Head Teacher, and during his time at the school has guided it through two successful inspections by Education Scotland.

The most recent, in June 2019, produced the best ever secondary inspection report to be issued by Education Scotland.

Councillor Paul O'Kane, Convener for Education and Equalities at East Renfrewshire Council, said: 'This is fantastic recognition for John, who has been dedicated to his profession for more than four decades. He is respected throughout the education sector and has guided St Ninian's superbly during his time at the school. It is a well-deserved honour and congratulate him wholeheartedly on this amazing accolade.'

Mr Docherty will celebrate his OBE award with wife Helena, who is a teacher of French and Spanish, and daughter Marie-Helena, who is a doctor and former St Ninian's High pupil.