Live Chat is unavailable today. Due to high call volume our resources have been moved to answer calls.

Many of our services are available online or if you require further support or assistance, contact customerservices@eastrenfrewshire.gov.uk  Thank you for your patience at this time.

Residents across East Renfrewshire are being reminded that X marks the spot when voting in the Scottish Parliament Election on May 6. 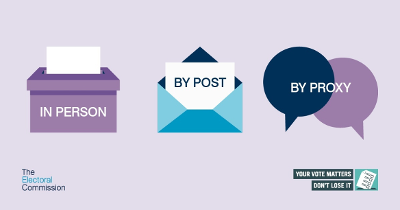 A total of 129 MSPs (Members of the Scottish Parliament) will be elected.

There are 73 constituencies, each represented by one MSP who is elected through the purple-coloured ballot papers, with the candidate who receives the highest number of votes winning.

There are also eight regions, each represented by seven regional MSPs who are elected through the peach-coloured ballot papers.

A formula is used to allocate these 56 regional seats to the various parties to make the overall result more proportional.

You will receive two ballot papers and you will vote once on each paper. On the purple ballot paper you vote for a candidate to represent the local constituency. Mark an X in the box opposite the name of the candidate of your choice.

One candidate will be elected as MSP for Eastwood, one candidate for Renfrewshire South, and a further seven candidates from across the wider electoral region will become MSPs through the West of Scotland regional list.