The father of Brazilian football 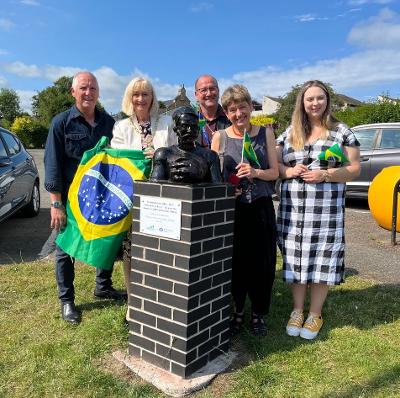 A new sculpture honouring the contribution of Thomas Donohoe, originally from Busby, East Renfrewshire, credited with first introducing football to Brazil in 1894, has been officially unveiled by Provost Mary Montague.

Commissioned by the Council, supported by Busby Community Council and funded from the Scottish Government's Town Centre Fund, it is hoped that the sculpture will attract visitors to the village, as well as adding to the cultural and sporting links between Scotland and Brazil.

Thomas married his wife, Eliza, in 1890, by which time he was a well-established print worker alongside his father, Patrick, who was a block printer in the local cotton mills. Most of his siblings also worked in the mills. Following a decline in the fortunes of the industry in Scotland, Thomas emigrated to Brazil to work in the developing cotton industry there. He arrived in Bangu, which is now on the outskirts of Rio de Janeiro, in 1894.

There has been quite a bit of family research done on Donohoe through the national archives of Scotland by one of his living ancestors, Jim McGuire. One of seven children, he lived in a number of addresses in Busby, most notably Riverside Terrace. He played football in the Scottish local leagues alongside and against several players who went on to be professionals and influential individuals in Scottish football.

The first football match in Brazil was organised by Donohoe and took place in August 1894. From that moment Thomas began to organise football matches at the Bangu Mill where he worked and to form local competitions with other migrant groups and workplaces. From these humble beginnings the game went on to become the premier sport of Brazil with Donohoe playing a key role.

Today, football is a cornerstone of Brazilian culture and the local Bangu football team, Bangu Atlético, take great pride in the contribution Thomas Donohoe made to Brazilian football all those years ago. So much so that they commissioned a five metre statue of him which was unveiled to mark the 2014 World Cup, the final of which was hosted in Rio De Janeiro.

Provost Mary Montague said: 'Already honoured with a sculpture in Brazil, I think it is only right that we also pay tribute to football legend Thomas Donohoe, in his home town of Busby. I was delighted to see the finished sculpture here today and would encourage anyone visiting Busby, to stop by and see Thomas and then discover the great range local businesses have to offer.'

The sculpture, which now sits on Main Street in Busby, was designed and created by artist Kate Robinson. Her previous football-inspired works include the Jimmy Johnstone and Brother Walfrid sculptures in place at Celtic Park.

Kate Robinson said: 'It was great to make the sculpture of Thomas Donohoe as it is such an interesting story linking Scotland and South America. The mountains of Ben Lomond and Sugarloaf are inscribed beside the flag of Brazil on the back of this sculpture and I hope both residents of Busby and visitors enjoy this new feature in the town.'