We hosted this year's Holocaust Memorial Day event on Monday 23 January, the first time the event has been marked in person since 2020. 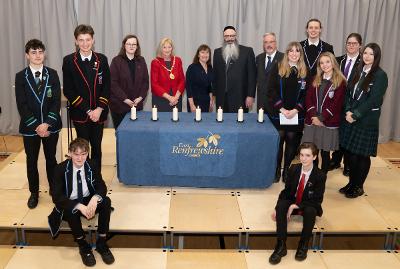 The memorial event, held at Calderwood Lodge Primary School, was an evening of music and stories which highlighted the true horror of the Holocaust and subsequent genocides.

As well as moving music performances by East Renfrewshire school pupils, Gillian Field told her parents' compelling story. Both Henry Wuga MBE and the late Ingrid Wuga, who was awarded the British Empire Medal, escaped Nazi Germany as part of the Kindertransport - a humanitarian programme for children and young people fleeing persecution in 1938 and 1939 - and started a new life in Scotland.

Pupils from Barrhead and Mearns Castle High Schools spoke of their learnings through the Lessons from Auschwitz project and the Anne Frank Trust.

East Renfrewshire Provost, Councillor Mary Montague, who welcomed everyone at the memorial said: 'It is an honour to host this event annually, especially as we were able to do so in-person once again. We are home to Scotland's largest Jewish population and enjoy a wonderful relationship with the Jewish community, so marking Holocaust Memorial Day every year is something extremely important to all of us. Listening to the trauma experienced by Gillian's parents was truly harrowing but it is only right that we listen to them, never forget what they went through and help to ensure that it never happens again.'