Live Chat is unavailable today. Due to high call volume our resources have been moved to answer calls.

Many of our services are available online or if you require further support or assistance, contact customerservices@eastrenfrewshire.gov.uk  Thank you for your patience at this time.

Events will be held across East Renfrewshire this Remembrance Sunday (14 November) to commemorate the area's fallen war heroes. 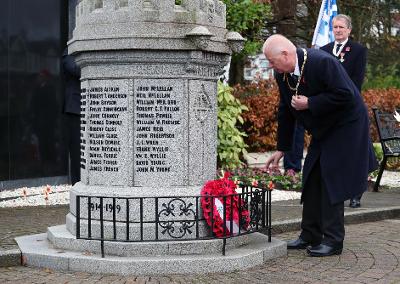 Residents, councillors, local dignitaries and veterans will attend services across the authority to pay their respects.

The first service will be held in Newton Mearns, beginning with a parade from Fairweather Hall starting at 10.45am. The parade will reach the Cenotaph on Ayr Road for a service of Remembrance and laying of wreaths organised by the Royal British Legion Scotland, Newton Mearns Branch at 11am.

The Glasgow Jewish Representative Council and Association of Jewish Ex Servicemen and Women will also hold a parade from Fairweather Hall at 10.35am to join the service at the Cenotaph.

In Neilston, the Neilston War Memorial Association will meet at Neilston Parish Church, Broadlie Road at 11.45am for a parade to the war memorial for a service of Remembrance and wreath laying at 12pm.

In Barrhead, the United Services Club will lead a parade from Paisley Road at 2pm to reach Cowan Park for a service and wreath laying at the war memorial from 2.30pm.

Members of the public and community groups wishing to lay a wreath are asked to do so outwith the official ceremony to help ensure the number of people within the Cenotaph area is kept within permitted limits.

Provost Jim Fletcher said: 'I'm delighted that Remembrance Sunday services will resume across East Renfrewshire again this year after our usual services had to be taken online last year due to the Coronavirus pandemic. The anniversary of the Armistice that ended World War I in 1918 is an important opportunity to pay tribute to those who have lost their lives and made sacrifices for our country to protect our lives and freedoms so it is a day we must not forget. I'd also encourage as many people as possible to take part in the two minute silence at 11am on Thursday 11 November and Sunday 14 November and pay their respects.'